We have two payment options for this item. 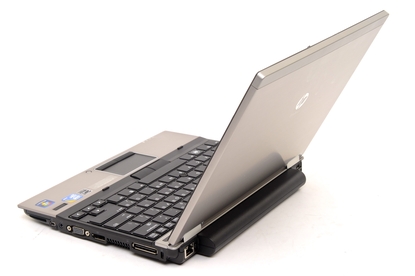 HP’s EliteBook 2540p is a small, strong and well-featured 12in business notebook that will run pretty much any office application you throw at it. It has a fast yet power-efficient Core i7 CPU under the hood, as well as plenty of RAM and disk space. However, it’s the exterior of the laptop that immediately impresses everyone who holds it.

The Elitebook has a scratch-proof lid made out of anodised aluminium; its screen is held by metal hinges; and it even meets military specifications for vibration, dust, humidity, temperature and altitude. (You’ll apparently have no problem using it at, as long as you’re wearing a space suit.)

It looks the same as the but there are some differences in the ventilation and the placement of ports. The right side of the chassis shows the most evolution, as it now has a combined microphone and headphone port (instead of two individual ports), and a USB port has been removed in order to make way for a DisplayPort. Furthermore, the air vents, which used to be located on the underside of the laptop, now stretch all the way up the right side, allowing more air to escape.

There are three USB 2.0 ports on this laptop (up from two on the previous version), and two of these ports are located on the rear where the Kensington lock used to be. The Kensington lock is now located on the right side, but its position is right next to the port replicator slot, which could make it awkward to use both features at the same time.

On the fingerprint reader was located in the centre of the right palm rest and was a nuisance while typing. On the it has been moved up a little. Even so, it can still sometimes get in the way when you type (although not as much); if your palm swipes it accidentally, the HP security software will be initiated.

The weighs 1.8kg, which is slightly heavier than the 1.7kg. A built-in DVD burner, decent speakers and a comfortable, spill-resistant keyboard help account for the weight. The notebook actually feels a little heavier than 1.8kg because it’s so compact.

We love the screen on the : it is bright and has a built-in ambient light sensor and a pop-out keyboard light. Both of these features were very useful during our tests; especially the keyboard light, which is great for night-time typing. The only thing we don’t like about this laptop is its row of touch buttons across the top. They are constantly lit up and which sometimes take a few seconds to respond when you touch them.

HP products are available at the best market prices in Kenya from Patabay Kenya. A well-known dealer for HP products and other top brands in Kenya. We have partnered with HP Distributors to bring you genuine and quality HP Items at the lowest market rates you can find anywhere in Kenya. Call or Shop online from your trusted HP Shop and have them delivered to you at your doorstep within 24 hours, and its Pay on Delivery. All our products have manufacturer warranty